It’s means the midfielder is on the exit ramp, ready to leave Barcelona. Ernesto Valverde doesn’t see the Croatian in his plans, and Barca would be looking forward to the sale partly from an economic perspective.

Inter Milan are said to be going strong for the signing, but it’s also claimed Manchester United have contacted the Catalan club to ask about the signing.

The mention of the Premier League side is very brief, yet to the point. There’s no further explanation of what happened after the Red Devils asked, or whether Rakitic would look well on a move to Manchester United.

Barcelona would be looking for a €40m fee for the 31 year old, a fee that Inter will likely try to push down as far as possible. With relatively high wages added on to that, there’s a possibility the whole operation could be too expensive for the Italian side given some of 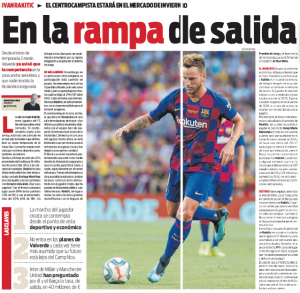 A January transfer, which is what Barca want, may be easier for Manchester United to finance, although they’d likely also want that €40m figure reduced.