Not many people will have both Nottingham Forest and Derby County tattoos, but Lars Bohinen does.

The 50 year old played for the English rival clubs, and also had a spell with Blackburn Rovers… so the Lancashire team have their own tattoo.

Speaking to VG in Norway, he explains that of the clubs, it’s Nottingham Forest which holds the most special place in his heart, and that leads to a dream to manage the Championship side one day.

Bohinen confirmed Forest are his ‘dream’, and explained he probably needs some more experience first: “It would be the most fun if I had the opportunity at Nottingham Forest. But then I must have a little more to show than training Norwegian teams between the top two divisions.”

Currently Aalesund manager, he now has to get the club back to the Elite series, and then he may start to get attention for a coaching career which started relatively late.

He believes that should he be given top players then he can prove he’s able to develop them further and get results. Then that could potentially lead to something like 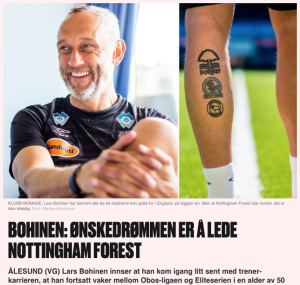 Nottingham Forest, although he may have to do something about the Derby County tattoo if that happens.

“Now I want to be a trainer for as long as I can, I got started late, but nothing is impossible. If you are going out of the country, you should preferably have results to show in Europe as well, not just in Norway, so it is probably too early for a job at Forest. But in the long run – why not?”

Thanks to @RonnyS0L for the heads-up.