Home Europe “I had many offers” – Player explains how Wolves stars and Nuno...
SHARE

Jesús Vallejo moved to Wolves on loan in the summer window, in a transfer which was reported by the Spanish media out of nowhere.

They got the claims spot on and the 22 year old central defender has so far appeared in just one Premier League match, the 5-2 defeat to Chelsea. He’s also picked up minutes in the Europa League and EFL Cup.

Spanish newspaper AS has sent someone to Wolverhampton to speak to the player, and it’s clear he’s already enjoying the move and the chance to learn in a new environment.

Asked how things have been going so far, Vallejo told AS: “Very well, since the first day I have been treated phenomenally. I am very comfortable with the team, the coach and the way we play. I had many offers on the table.”

Then quizzed on why he chose Wolves, the Spaniard explained: “It was a bit of everything… I wanted to live this experience. I talked to Jony and Adama, and Real Madrid strongly recommended me to come here. They told me that I would continue to progress and I wanted to go hand in hand with the club. And of course the Wolves bet influenced. Nuno called me and told me about the project. It was the club that bet more on me.”

Asked what it’s like for a boy from Zaragoza to move to Wolverhampton, he explained: “I had the experience of being in Frankfurt for a year, but I have noticed more difference. Frankfurt looked more like Zaragoza or Madrid. This is different but I like the pace they 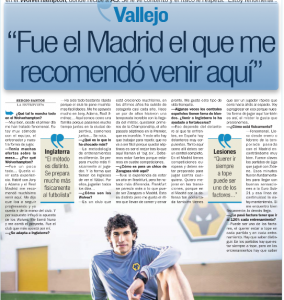 have of eating and dining. I like this kind of quiet life.”

AS have also published a second article, explaining Vallejo is on what could be considered a football Erasmus, taking part of his education in a different country.

The youngster is clearly well thought of in Madrid, and AS journalist Tomas Roncero ends his article with: ‘Crack, we want you back home soon.’