Usually when the Catalan sport media speak to a footballer, questions about Barcelona aren’t so far away, and that’s been the case with Liverpool’s Alisson.

The Brazilian has given an interview to Mundo Deportivo, and after asking some questions about his personal situation and success with Liverpool since moving from AS Roma, they got around to what they really wanted to chat about.

First off, as a way of easing Alisson into the one question they really wanted to ask, the Liverpool stopper was quizzed on Arthur. He said: “He’s a great player. A midfielder of high quality and modern. He has a very good reading of the game.”

And then, inevitably, came Neymar.

Mundo Deportivo wanted to know what Alisson would think about his national teammate returning to Barcelona: “He’s a high level player and would be essential in any team in the world. If he returns to Barcelona or not is a problem of his, but I wish him good luck and to play with his usual joy and energy. Anywhere.” 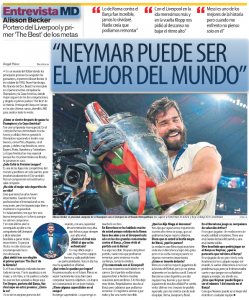 Barcelona’s closest media won’t let go of the idea of Neymar returning to the club, and will therefore ask anyone they can about the possibility.

Given they’re currently very happy with Marc-Andre Ter Stegen, the Liverpool player wasn’t quizzed on the chances of him personally moving to Barcelona.