Manchester City attacker Leroy Sane has been selected in the European Team of the Week after his performance against Crystal Palace on Saturday.

Each week the Italian sports outlet selects the best players from outside Serie A, and the Germany international has been picked after the weekend’s round of matches.

Sane was instrumental in Manchester City’s victory over Crystal Palace at the weekend after Pep Guardiola’s team ran out 5-0 winners to remain top of the Premier League table. The Germany international was on hand to score his side’s opening goal, and also provided two assists.

This was the first time Sane has completed ninety minutes in the league this season, with the German finding himself watching from the sidelines for much of the time. 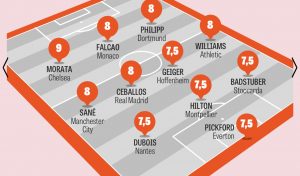 However, the youngster has already scored three goals in the opening six Premier League games, and Saturday’s performance has given a reminder to Guardiola of what Sane can bring to his team.

“Rainy and everyone was joking” – New signing on first day...