According to Fanatik, Galatasaray manager Fatih Terim is ready to give an ultimatum to Premier League linked winger Garry Rodrigues.

The attacker has been linked with a move to Newcastle United in recent months following two reported bids from the Premier League side.

The Cape Verde international has been outstanding for Galatasaray after the arrival of Terim in December, but his form has dipped in the past couple of weeks. 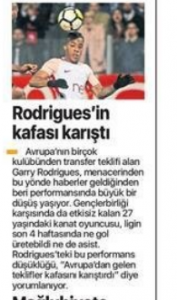 Fanatik say Galatasaray are unhappy about his latest performances, and they think recent transfer talk is the reason behind his poor form. Terim also thinks Rodrigues’ agent talking up a move has been a factor and the Galatasaray boss is now set for talks with the player.

In February we covered reports from Turkey that Newcastle United tabled a bid of €8m to sign Rodrigues in the January transfer window. This offer was instantly rejected by the Turkish side because it didn’t meet their valuation of the Cape Verde international.

Newcastle United also tried to sign the player in the last summer window when they offered €6m, and it’s expected they’ll come back in for him at the end of the season.

The Magpies should face competition to sign Rodrigues, with Everton and West Ham United also being linked with the winger in recent weeks.