According to a claim in the Spanish media. Espanyol goalkeeper Roberto Jimenez has received an offer from an unnamed Championship side.

The former Atletico Madrid is currently on loan with Malaga, but he’ll be returning to his parent club in the summer. However, Jimemez is only expected to be part of Espanyol’s second team next season, with Diego Lopez set to become first choice when Pau Lopez leaves.

This has led to reports the 32 year old will look to find a new club in the next window, and a move to England is looking like an option according to Sport.

One Championship side which may be in the market for goalkeeper this summer could be Nottingham Forest. The Championship’s current No.1 is Costel Pantilimon, but the Romania is only on loan from Watford until the end of the season. 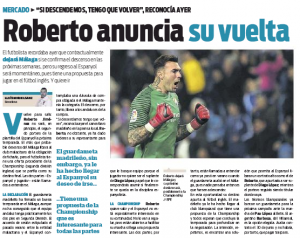 It’s worth highlighting Jimenez had three seasons at Olympiacos, leaving in 2016, and subsequently Nottingham Forest owner Evangelos Marinakis will know the Spaniard well.

Jimenez has also done the rounds in Spain, playing for several clubs, and it’s likely Nottingham Forest manager Aitor Karanka will be aware of his compatriot.

Crucially it’s stated everyone involved is waiting for the end of the season to ‘deepen’ negotiations, a scenario which would give Nottingham Forest the chance to see if they can sign Pantilimon permanently first.