With a current deal expiring in June 2021 in Milan, Hakan Çalhanoğlu could very well be a wanted man from January onwards.

In great form under Stefano Pioli, the 26-year-old and his contract situation are attracting interest from both England and Spain, with Manchester United ready to pounce.

This is according to Gazzetta dello Sport, who look at what the Serie A side have to do to keep their attacking midfielder, especially since Çalhanoğlu ‘is keen to continue his career in the club that signed him in 2017’.

However, ‘the dialogue for the renewal is stammering at the moment’, and despite there being contact in September, with an offer that would see his salary rise from €2.5m/year to €3m, this ‘doesn’t satisfy’ his entourage.

There has been a promise for a meeting between all parties to take place in November, with hope it’s a ‘decisive one’, but ‘it’s clear Çalhanoğlu expects more substantial proposals’, which he could get from Manchester United.

It’s explained ‘the brilliant performances in the national have captured the interest of major European clubs and the possibility of being able to sign him at no cost induces the suitors to present attractive offers’. 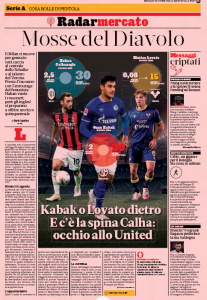 Manchester United are ‘certainly among the top clubs’ interested in Çalhanoğlu, and are ‘willing to offer him a rich salary for the next five years’.

Not only that, ‘but there are also important opportunities in Spain’.

It seems that until a new contract in Milan is agreed on, this could be a story that gains traction over the coming weeks.

We’ll be keeping an eye on it, but it could be a smart piece of business from United and Ed Woodward if they get this over the line for next season at little to no cost.

Çalhanoğlu has, so far, scored four goals and assisted another four in eight appearances this season under Stefano Pioli.

‘Without forgetting Newcastle’ – Signing ‘on the table’ for Magpies, would rock world football

Everton have made ‘polls’ for midfielder – Nothing ‘concrete’, wages a...

‘Without forgetting Newcastle’ – Signing ‘on the table’ for Magpies, would...

‘Logical’ for Man City to bet on player – One factor...