Anderlecht sold Jérémy Doku to Rennes for €26m in the last week of the summer transfer window.

Doku came up through the ranks of Anderlecht’s youth system and even before he signed his first contract with the Belgian side, Liverpool were keen on signing him.

The Reds’ interest in bringing the exciting forward to Merseyside has been discussed by the 18-year-old and his parents on various occasions.

L’Equipe states the opportunity to join the English champions back then was ‘tempting’.

The newspaper has also gathered comments from Anderlecht academy director Jean Kindermans, who details former Everton star Romelu Lukaku’s role in convincing Doku and his family to snub Liverpool and sign a contract with the Jupiler Pro League side.

Lukaku, like Doku, was a product of Anderlecht’s youth system, before moving to England when Chelsea signed him in 2011.

The current Inter Milan player struggled for opportunities at Chelsea, which is why the Blues sent him out on loan to West Bromwich Albion and Everton, before the Toffees signed the striker on a permanent transfer in 2014. 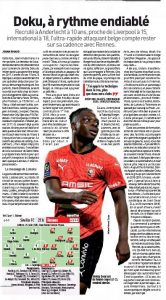 “It was a coincidence. Romelu, who comes by occasionally, was in my office at the time. We were talking about the difficulty of convincing young Anderlecht players to stay or sign young with us, like Jérémy,” Kindermans said.

“He said, ‘Boss, if you want, I’ll give him a call.’ I picked up my phone, recorded his message and then sent it to dad to give him advice from a guy who had gone through an early start. I think it may have played a small role.”