Tottenham Hotspur will travel to Belgium for the next match as they take on Royal Antwerp in the Europa League tie on Thursday.

Toby Alderweireld was born in Antwerp and the midweek tie will see the Spurs defender return to his place of birth.

Alderweireld left his country at the age of 15 when he joined Ajax. Since then, he has never represented Royal Antwerp or another club in Belgium.

Local newspaper Gazet van Antwerpen had an opportunity to interview the centre-back’s family members and the possibility of the north London club’s player returning to Antwerp was a common question thrown at them.

Toby’s father Vader Vic Alderweireld has revealed his son, who has already ‘bought land in Ekeren’, is planning to ‘play closer to home’ in the future.

“The house will be ready in the course of 2023, in line with his contract with Tottenham. We’ll see where Toby will play football, at Tottenham, Ajax, an Antwerp club or elsewhere. But the chance that he will play closer to home at the age of 34 is real,” Alderweireld Sr said.

Toby’s brother Steve and Sven are also looking for the Tottenham defender to return to Belgium.

Steve is of the belief the Belgium international moving to Antwerp will help them get even closer as siblings.

“I would love it if he came to play football in Antwerp again. A return would also tighten our brotherly bond,” Steve explained.

“This summer the three of us happened to play football on the FC Ekeren field. Believe me, that was at least fifteen years ago. We used to do nothing else in the garden. Our father then had to replace many of the windows in the garden house. I look forward to experiencing such moments more often.” 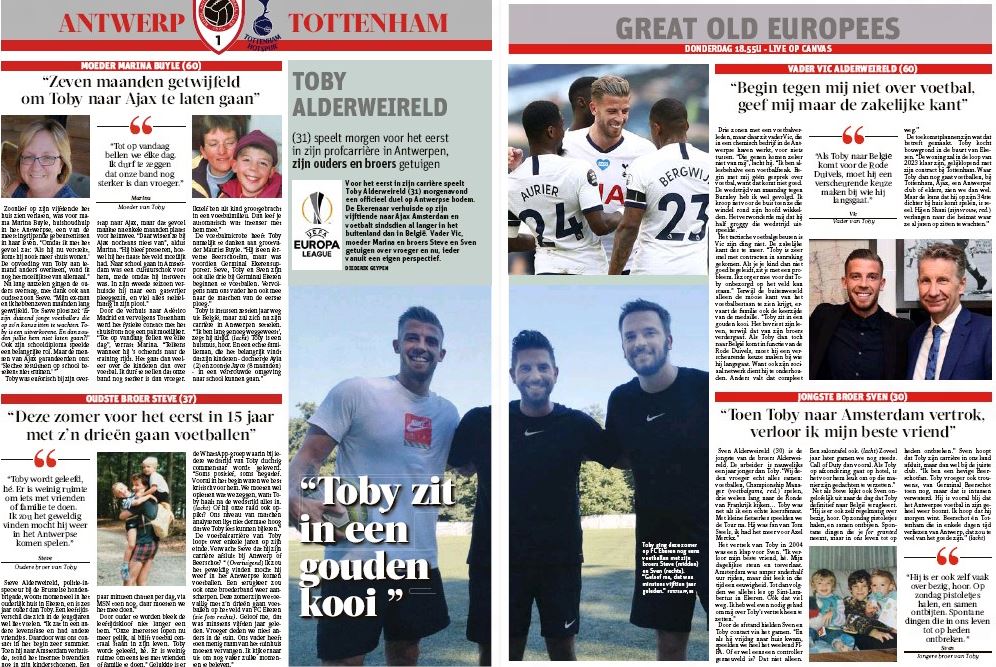 Sven, who is also wants Toby to end his playing career in Belgium, hopes his brother can find the ‘right club’, reports Gazet van Antwerpen.

“I am a passionate Beerschot fan. Toby also used to, by the way, from Germinal Beerschot back then, but that has now been liquidated,” Sven added.

“He is especially happy that Antwerp football as a whole is booming again. I hope he wins tomorrow. Beerschot and Tottenham who lose to Antwerp in a few days, that would be too much of a good thing.”