There’s been a number of stories about Ismaël Bennacer and the interest from Manchester City over the past few days.

Most of them have come from France, with both Foot Mercato and RMC Sport explaining that Pep Guardiola was a fan and had contacted the midfielder to discuss his plans for him going forward.

All this was helped by Bennacer reportedly having a €50m release clause in his contract, which would help any wealthy club in acquiring his services without talking with Milan.

Despite all this, the Serie A club were reportedly ‘not worried’ about the situation, as clubs needed to cough up the money in one single instalment to trigger the clause.

That has been reiterated on Monday by Corriere dello Sport, who also explain, as others in the Italian media have too, Bennacer’s release clause is only valid from 2021 onwards. 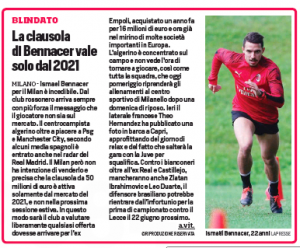 This means any club who would like to buy the Algeria international this year would have to start talks with Milan from scratch, and trying to do so won’t be met with a great smile.

The Italians plan on keeping their player, and he is currently ‘concentrated on the field’ as clubs continue their return to training ahead of Serie A returning later on this month.