Manchester United’s need for a right-winger has been well established, hence their continuously reported interest in Jadon Sancho.

Yet, as we’ve pointed out in the past, no manager will have a list of one player they want for that role, which means backup options will be written down somewhere, and for Ole Gunnar Solskjaer, his seems to include Federico Chiesa.

The Fiorentina winger is a target for many clubs these days, including the big Serie A sides, but we’ve seen a number of reports over the past few months suggesting Manchester United are hovering the 22-year-old, which Gazzetta dello Sport remind their readers about on Monday.

Nothing has changed much, since his club want €70m as a minimum for his services, which Inter and Juventus don’t really want to pay.

The former of the two would make a move if the demands were lowered and players could be included in the deal, but since neither of those things are what Fiorentina want, they’re at a bit of an impasse. 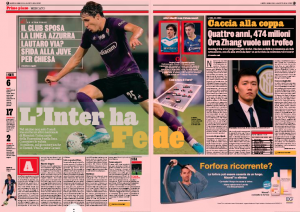 Moving onto Manchester United, it’s stated the Premier League club are ‘active’ on the player, meaning they aren’t just sitting back and watching what’s going on.

How far Ed Woodward and co. have gone, however, isn’t stated, but it appears they would need to be very convincing, as Chiesa ‘would have expressed his intention to still want to stay in Italy, especially in a year that will take him straight to the Euros’.

Manchester United will likely have the money if they want to spend it, but, at the end of the day, it all comes down to whether the player wants to move or not.