Home Europe Club signing Everton player have been after him for three years –...
SHARE

It was already very clear on Friday that Fraser Hornby wouldn’t be returning to Everton for the 2020-21 season, as both L’Equipe and RMC Sport were reporting that Stade de Reims in France were close to completing his transfer.

The Ligue 1 club were said to be paying the Toffees around €2m for the young forward, who spent the season on loan at KV Kortrijk in Belgium, and the 20-year-old would then put pen to paper on a four-year deal in France.

L’Union on Monday add a bit more, as the local newspaper claim the Scotland U21 international was being followed by Reims’ scouting group and their leader, Pol-Édouard Caillot, ‘for the past three years’.

They confirm the €2m fee and the four-year contract, adding that someone at the club told them: “He’s potentially a future great, and not only through his height. His signing adds an extra option for the technical staff”. 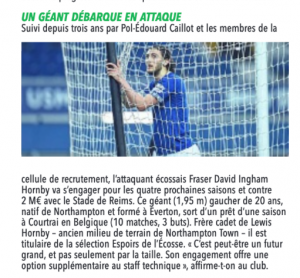 Reims were among the big surprises this season in Ligue 1, as the club were sixth when the French government pulled the plug on the current campaign, sitting one point ahead of Lyon with 41 points in 28 games.

As for Fraser Hornby, his loan in Belgium was a mixed bag, starting off as a regular before being used mostly as a substitute, totalling 14 appearances, four goals and one assist in all competitions.