Manchester City may have just said goodbye to Nicolas Otamendi, but it seems the player’s salary will continue being their responsibility.

Newspaper O Jogo reports today that the Premier League side will continue to pay for a major part of the defender’s salary at Benfica, even though he’s just moved on a permanent deal.

It’s said the player is signing a three year deal with the Eagles, and will make the same €6m net per season he used to earn at Manchester City.

Of the €6m, the English club will pay €4m in each of the two first years of contract. Only in the third year, all the expenses go to the Lisbon side. 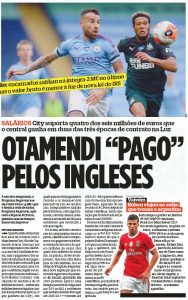 Otamendi landed in Lisbon last night, as he used the same airplane which took Ruben Dias to Manchester in the afternoon.

The Portuguese media had already claimed that Manchester City paid Otamendi a €2m departure bonus for him to leave the club. So his farewell apparently ended up being quite expensive for Pep Guardiola’s side.