Outlet Correio da Manhã is the only one with a story of a reasonable length, and they say the player’s departure from Porto is now ‘more blurry’.

It’s claimed that the Red Devils and the Dragons are ‘entrenched’ in their positions, as nobody seems to be willing to change their stance.

According to Correio da Manhã, Manchester United consider that it’s not worth paying over €15m for a player whose contract expires in 2021, and can be signed for free from January.

They also claim that Jadon Sancho is the club’s big priority, and that work is ongoing for his signing. 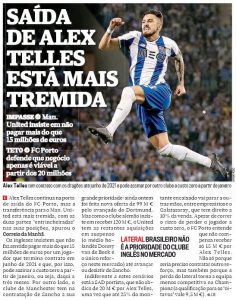 Meanwhile, it’s said Porto continue to demand €20m for Telles. They won’t bring this price down, especially because they’re losing 25% of this transfer to his former club Galatasaray and the agents involved.

Even though there’s the risk of losing him for free, Porto consider it’s not worth letting the player go for only €15m. Firstly, because they’ have to find a replacement, and also because they’d have a ‘less competitive’ team. Correio da Manhã points out that qualification for the Champions League knock-out stage is worth €9.5m to the club. 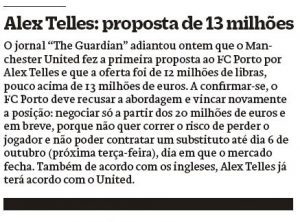 Newspaper O Jogo brings a paragraph on Alex Telles’ situation as well. They take claims from the English media saying Manchester United made an offer of just over €13m for the player, and say that in case it’s confirmed, then Porto should turn it down and continue to demand €20m.