On Sunday evening, Portuguese side Benfica released the official numbers for the sale of Ruben Dias to Manchester City.

They’ve made it official the defender is moving to the Premier League side in a €68m deal, plus performance bonuses which can reach up to €3.8m.

Newspaper Correio da Manhã brings some details of the negotiations today, saying the agreement had several changes in the 48 hours prior to announcement.

It’s reported the deal could have cost €80m, if bonuses had been a bigger part.

Correio da Manhã claims that Manchester City didn’t want to guarantee over €55m initially, and continued pushing for the bonuses. They also tried to include difficult goals to achieve, such as individual achievements and Champions League wins. 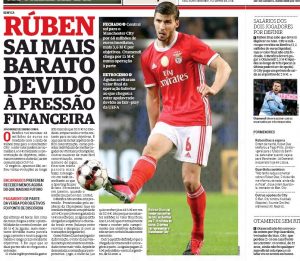 Regarding the transfer of Nicolas Otamendi, Benfica communicated they paid €15m for the defender. Correio da Manhã adds that he should make the same €2.5m per season that Ruben Dias used to. It’s also claimed Manchester City are paying the Argentine international a ‘departure prize’ of €2m.