Swapping Sevilla for Leicester, any interview with Vicente Iborra from a Spanish newspaper was always going to involve questions about the weather and food.

Unsurprisingly, that’s what Mundo Deportivo opened with when they spoke to the defensive midfielder for their Thursday edition, and yes, the 29-year-old misses his Spain comforts.

However, that doesn’t mean he’s unhappy. In fact, it’s the complete opposite.

He said: “The club and my teammates have done everything possible for me to feel comfortable since I arrived, and I’m very grateful.”

Part of an impressive Sevilla team, many wondered why he decided to move to England, especially to a team who struggled last season, unable to repeat their Premier League winning exploits.

He explained: “Eduardo Macia convinced me. He came to find me with his aides and made me feel important within their project. He’s been at Valencia, Betis, Fiorentina and Benitez’s Liverpool, and someone important who knows English football well.” 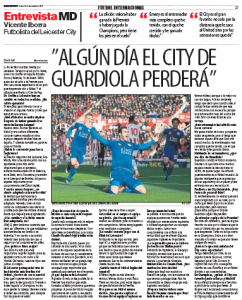 Now fully adapted to life in England, with their different timetable and customs, Iborra seems settled, and feels this Leicester side can do well this season.

He continued: “Our objective is to finish as high as possible. We want to progress. Despite the irregular start, we are now in a much better situation, and that’s how we need to continue.”

One of the big changes has been the arrival of Claude Puel, whose philosophy appears to already be clicking at King Power Stadium, beating Everton 2-0 and drawing against Stoke away 2-2.

The big test, however, will come this weekend against Pep Guardiola’s Manchester City, currently unbeaten in the Premier League, yet Iborra doesn’t see them as invincible.

He said: “It’s true that it’ll be very complicated because of their level and the resources they have, but we are prepared for City to lose one of these days.”

Could that day be Saturday?