It seems Portuguese newspaper Record jumped the gun when announcing the transfer of Umaro Embalo to Manchester United.

The outlet was pretty certain when saying the agreement was done, but after a few days of silence, they admit the move isn’t happening. At least not for now.

That’s because the player’s agent Catio Balde gave them an interview, and claimed Embalo is not leaving Benfica in the immediate future.

“The president doesn’t want to let Embalo go,” Balde told Record.. “We talked about his future and came to the conclusion that it would be good for him to continue at Benfica because in Seixal he has all the conditions to continue to evolve.” 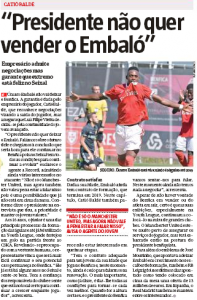 The agent has admitted interest from Manchester United, but claimed that a move to the Red Devils is still far from happening: “It’s not only Manchester United, but now it’s also not worth talking about it because it’s a possibility that is no longer on the table. As the president said in the interview he gave, the priority is to keep the young values.”

“He has been in Seixal for a few years and feels good. He has the confidence of the people in charge of the club and feels that he is in the right place to continue growing as a player ”

Embalo still doesn’t have a professional contract, as he’s currently on an academy deal which expires in 2019. But the representative doesn’t think it’s a problem: “He has the right contract for a young man of his age who plays for Benfica and, at the moment, it’s still early to talk about renewal. The most important thing, as I have said, is to give him the conditions to become better and better. When the time is right, I and the president of Benfica will sit down and talk. At this moment we still have nothing to negotiate.”

In the story, Record says that Balde is ‘admitting’ the negotiations for a departure, which may be overselling it.

That said, this is the second time in around a week that Balde has confirmed Manchester United interest, the last time mentioning talks.