Antoine Griezmann to Barcelona is gaining speed in Spain, with the Catalan media making a big effort to push the story.

It’s not the first time in recent months that Griezmann has been the subject of Barcelona claims, but the timing has worked better this time around, and the story has spread.

Sport, a Catalan newspaper, has several articles in their Thursday edition on the potential transfer and one brings Manchester City into it.

These days, dragging Manchester City into a transfer chase can be done to add drama, and that could very much be the case here. Pep Guardiola probably likes Griezmann as a player, but must know his current City squad isn’t calling out for the Frenchman. 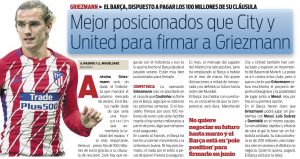 Regardless, perhaps Sport just mention City so they can say Barcelona have a better chance. It’s stated Barca are better positioned than either Manchester club to sign Griezmann, even though it’s claimed both have made some sort of contact over a deal.

If what Sport are saying is true then it’s a surprise, on more than one level.