This week Molby is looking at Kasper Schmeichel, and explains that in Leicester City’s woeful Premier League season, Schmeichel is one of the few to come out with credit so far.

Whilst Molby is happy to point fingers at the likes of Jamie Vardy and Riyad Mahrez, he believes Schmeichel is still playing at the same level, and should be looking toward the exit if the club’s current slump continues. 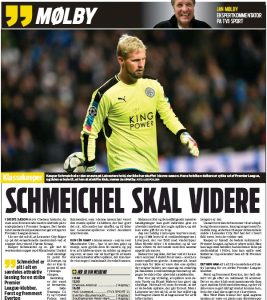 A possible club the former Liverpool player picks out is Everton, believing that Ronald Koeman will ‘surely go for a goalkeeper this summer’.

Molby calls Everton, his former rivals, ‘a great club with passionate fans’ and thinks it would be a good stage for 30 year old Schmeichel.

Maybe Molby’s old club wouldn’t be too bad an idea either. Jurgen Klopp isn’t entirely sure who is better at the moment between Simon Mignolet and Loris Karius, and Schmeichel could be an improvement on both.