Home Europe Leicester got player’s transfer over the line only a ‘handful of minutes’...
SHARE

After first being linked sporadically, and then consistently, with a move to Leicester City, Dennis Praet eventually got his move to King Power Stadium on deadline day, moving from Sampdoria for £18m.

The midfielder is now reunited with his former Anderlecht teammate Youri Tielemans, and was announced at 7pm on Thursday evening.

That’s two hours after the transfer window closed, and it’s reported in Italy Leicester came very close to repeating the same mistake that stopped Adrien Silva from featuring for them straight away.

Corriere dello Sport explain the papers to officialise the deal were only signed a ‘handful of minutes’ before the deadline, but in the end, all was well. 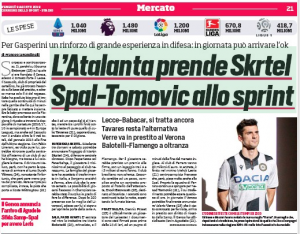 The player will now have to wait and see when he can make his debut for his new club, as Brendan Rodgers will likely want to ease him into his new environment, especially after arriving so late in the summer.

Having spent his preseason with his former side, Praet might need some time to adjust to the Leicester manager’s philosophy.

Then again, Tielemans was thrown in at the deep end and did rather well.

Perhaps the same will apply with his new teammate.