A few Portuguese newspapers say today that Tottenham Hotspur made a late attempt to sign Bruno Fernandes from Sporting.

The outlets have different versions of how it happened, but they all agree there was a new bid to get the midfielder.

Let’s start with Correio da Manhã, who don’t really have a lot to say. They just claim the Spurs tried a ‘last hour offer’, but was turned down by president Frederico Varandas, since it still didn’t reach the €70m demanded by him.

But A Bola claims the Spurs actually got to that amount. They write that by lunch time, the London side offered €60m up front plus €10m in bonuses.

It’s claimed that Frederico Varandas wanted €85m, and was planning to accept even €80m, but ‘hesitated’ when he saw this last offer on the table.

The problem is that he took too long to give a response, and with Giovanni Lo Celso being on his way to London, Spurs gave up on Bruno Fernandes. 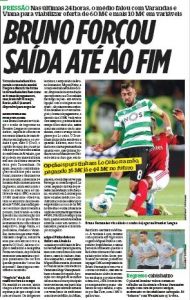 Finally, it’s O Jogo who brings the most complete story. They say Bruno ‘forced his way out until the end’, and nearly got what he wanted.

They say that the Spurs’ bid of €60m plus €10m was made on Wednesday night, but it was rejected by Sporting since the club weren’t sure about those bonuses.

They still didn’t accept the offer, leaving the player ‘disappointed’ and ‘revolted’, especially because they had promised ‘not to cut his legs’ in case a good bid arrived.

On Thursday morning, agent Miguel Pinho and people from Base Soccer, the company which intermediated the talks, still tried to review details such as payment methods and the performance bonuses, but O Jogo say there wasn’t enough time, especially because Lo Celso was arriving, and to make things even more unlikely, Christian Eriksen was staying.

The newspaper explain that due to the player’s dissatisfaction with the situation, Sporting were ready to give in a little, but there was no time left to make things different.