Paul Pogba has been a priority target for Zinedine Zidane, but Real Madrid are looking more and more likely to fail in landing the Manchester United star.

The Premier League window closed on Thursday and Friday’s edition of Sport state United’s inability to bring in a new midfielder (i.e. a possible replacement for the Frenchman) makes it difficult for Los Blancos to get their man.

Though Pogba and his agent, Mino Raiola tried to push for a transfer, Real Madrid and United could not find an agreement.

Sport state it’s ‘not impossible’ for the La Liga giants to sign the Frenchman before the window in Spain closes, but their chances of landing the midfielder is ‘practically nil’. 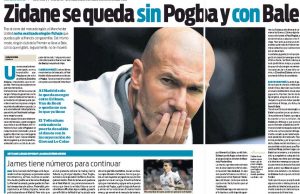 Ole Gunnar Solskjaer and the British media repeatedly stressed during the summer Pogba would not leave United and it looks like the Spanish press have finally started to accept it now.