Home Championship Leeds United ‘will bid’ for player in January, and face tussle with...
SHARE

On December 12th, we covered several reports from Spain on Ibai Gomez of Alaves.

AS claimed that Leeds United will return with an offer around for the 29-year-old winger, while El Correo reported that Athletic Club Bilbao see the winger as the ‘most feasible’ option in January.

Today’s edition of AS again claims the forward is one of the objectives for the Basque club.

The Championship side once again gets a mention in the report and it’s also claimed that Leicester City have joined the race to sign the La Liga player. Leeds and the Foxes ‘will bid’ for Gomez in the winter market.

Next month’s transfer window will be the only option for Alaves to cash in from the player’s sale, if he does not decide against signing an extension.

He has a €10m release clause in his contract, but Gomez will be available for €4m and the report says Leeds and the Foxes will make bids for him. 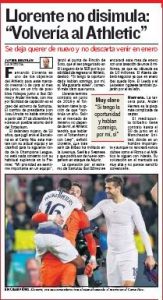 Earlier in October, Sport Witness reported that Gomez is ‘very interested’ in making a switch to England.

Bilbao have struggled so far in the league this season, while Leeds are playing in the second division of English football.

A move to Leicester will give him an opportunity to play in the Premier League and it should be seen if Claude Puel’s side will use it to their advantage to tempt Gomez to join them.