It’s been a while since the Spanish newspapers were pushing the idea of Ibai Gomez potentially moving to Leeds United in the winter market.

With the Championship club interested in the summer, it then went quiet until the story rose again in October, looking towards the January market.

Sport Witness was able to back up claims of Leeds making offers in the summer, but at the time Gomez wanted to stay at Alaves. A source close to the potential transfer explained that player would be ‘very interested’ in a move to England, and the chance to play under Marcelo Bielsa again.

Wednesday’s edition of the Basque version of AS goes over interest from Athletic Club Bilbao, but Leeds United get a mention too.

It’s stated the club are ready to return, motivated by their ‘eagerness’ to secure promotion 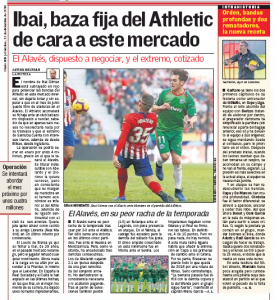 to the Premier League this season. Gomez is a long term target, and with his Alaves contract ending in June, his price is somewhat under pressure.

AS say the interested clubs will ‘try to address’ the transfer next month for ‘about €4m’.

Then it’s up to Alaves and Gomez.