Wednesday’s edition of Spanish newspaper AS has an article on the future of Ibai Gomez, and interest from Athletic Club Bilbao and Leeds United.

Alaves haven’t yet completely given up hope of keeping the player, and are still looking to get him to renew his contract.

That deal expires at the end of the season and Wednesday’s edition of Basque newspaper El Correo says Alaves may be tempted to sell the player, who has a €10m buyout clause, for less in January so they can get something.

Unfortunately for Leeds, it’s explained Athletic see Gomez as their ‘most feasible’ option during the winter window.

Ander Herrera and Fernando Llorente are named as others, but they’re thought to be far less likely than the Alaves player. Given Athletic’s tough recruitment guidelines, there’s 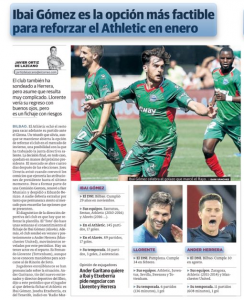 not a lot of players they can go for so they’ll go all in on this one.

That presents competition for Leeds, with AS saying the Championship club are set for a return in the winter market.

This sets up a battle between Marcelo Bielsa and Athletic, which is an intriguing situation.