Two days ago, France Football reported that Everton want RB Leipzig striker Jean-Kévin Augustin and the Merseyside club were planning to make a €40m bid ahead of the winter market.

After France Football’s report broke, Leipziger Volkszeitung in Germany reported on December 12th the English club’s winger Ademola Lookman could be involved as a part of the deal.

An inevitable next step.

The German outfit are aware of the England U21’s talent, having had him on a temporary deal during the second half of last season.

Leipzig sporting director Ralf Rangnick was asked about the recent claims from France Football linking the 21-year-old with the Premier League side.

“We know nothing about it. I also do not know why France of all people should know that an English club should be interested in a French player in Germany. This is a topic for the rumour mill, we have no plans in any direction,” local outlet RB Live quoted Rangnick as saying. 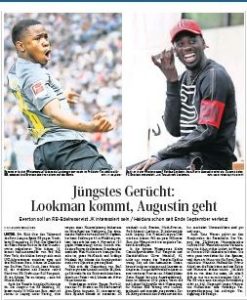 Leipzig’s comments is likely to put an end to the recent speculation linking Augustin with a move to Goodison Park, while it is also expected to put rumours of a swap deal including the two attackers to bed.

Given that the footballer is French and much if not all of his entourage will be French, the link turning up in France isn’t odd at all… and Rangnick must surely know that.

The RB Leipzig chief seems rattled, which is interesting given how content he was to repeatedly speak about Lookman publicly.