It was explained the newly promoted Premier League side are ‘very interested’ in the 18-year-old, but they have not agreed a deal with Dinamo for his signing.

The centre-back played 66 minutes in his side’s Champions League qualifier against CFR Cluj on August 26th, and he ‘played brilliantly’, reports 24sata.

Gvardiol’s performance against Cluj was sufficient to convince Marcelo Bielsa, and according to the report, the Argentine ‘did not want to wait’ for the teenager.

It’s claimed the Whites manager ‘ordered’ the leaders of the English club to bring the youngster to England. 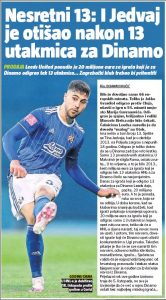 This saw Leeds make an offer of around €20m for a player who has made 13 first team appearances for Dinamo Zagreb.

The proposal is ‘not rejected’ and 24sata suggest Dinamo won’t get any better.

The newspaper is of the belief the Croatian side ‘should accept’ Leeds’ offer and invest the money in building a competitive squad.