However, the Whites are still in the market looking for a new centre-back, and reports coming out of England explained Dinamo Zagreb’s Joško Gvardiol has emerged as a transfer target for the newly promoted Premier League club.

Croatian outlet 24sata have relayed these claims in today’s edition of the newspaper and state ‘the story is not a rumour, but is true’.

Dinamo Zagreb sealed a 4-1 win against NK Osijek over the weekend and the 18-year-old was left out of the squad for the tie.

Another Croatian sports newspaper, Sportske Novosti, states the teenager missed the tie due to a foot problem and will miss Croatia U21’s September matches. 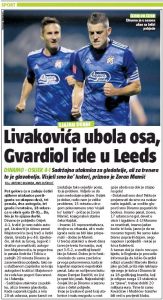 Sportske Novosti also mention about claims made in England covering Leeds interest in Gvardiol, and they state, according to their own information, Marcelo Bielsa’s side are ‘very interested’ in the player.

However, the English club have not agreed a deal with Dinamo Zagreb for Gvardiol’s transfer.

Gvardiol primarily operates as a centre-back, but can be used on the left side of the defence as well.