This morning, we covered a story from Portuguese newspaper A Bola which said Leeds United are interested in João Palhinha.

Their report said the Whites made an approach to Sporting to know the conditions for a possible transfer, and the Lisbon side are demanding €15m.

It turns out that O Jogo brings a very similar article about this chase today, and the only difference is that they add Wolverhampton Wanderers to this race.

The outlet uses the same headline as A Bola, which says ‘Leeds ask for Palhinha’, and brings the same information regarding Sporting’s demands of €15m. 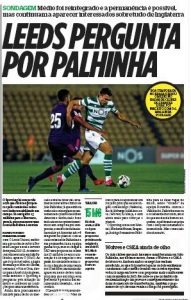 The only interesting line added by O Jogo is that the approach was made by Leeds United’s ‘duo’ Victor Horta and Marcelo Bielsa.

Regarding Wolverhampton, the newspaper claims that even though their chase went cold, there’s still a chance they get the midfielder.

It’s said Wolves and CSKA still have him as a target and could make a new attempt for his signing soon.

So it seems there could still be an interesting race for Palhinha in this final stretch of the transfer window.