The Sporting midfielder has been linked with a transfer for much of the summer window, with Wolves initially pushed forward as the club which could be signing him.

Wolves then seemed to back away, and CSKA Moscow moved into the picture, however, the Russian club haven’t been able to please either sporting or Palhinha.

According to repeat claims from the Portuguese media, the player prefers a move to the Premier League. With Wolves hesitating, that would be good news for any Leeds United interest.

A Bola reports Marcelo Bielsa’s side have ‘asked’ about the conditions for the signing. They’ll have been told Sporting want €15m and not a penny less, otherwise the Lisbon club will keep Palhinha in their squad for next season, and offer him a renewal. 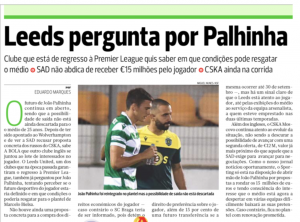 Whether that stance is concrete or not is probably worth testing.

So far, Sporting haven’t received a concrete offer from Leeds.