Filip Krovinovic is on the verge of being announced as a West Brom player.

We’ve covered multiple claims from the Portuguese media and today brings some further details on the potential move.

At the weekend it was claimed Benfica were looking for €600k for a one year loan deal, but the Baggies had only offered €200k, a figure deemed to be unacceptable.

Slaven Bilic had ‘specifically asked’ for the signing, so a further effort was expected to get a deal over the line.

Then on Monday it was reported the player was set to fly to England to complete a transfer to West Brom, with the club paying £300k. That amount would be doubled in case of promotion to the Premier League.

Tuesday’s edition of Record has some further claims, stating the Championship club could end up paying close to €800k, although nobody wants them to. 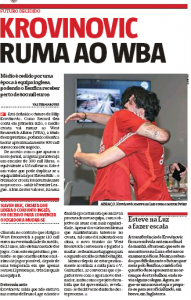 There’s also a clause which would fine West Brom €110k if Krovinovic doesn’t play half their games, with Benfica clearly wanting the 23 year old to get time on the pitch.

Despite approaches from various sides, it’s explained Bilic has personally convinced the player.