With a new manager in charge for next season, West Bromwich Albion will likely be looking to make plenty of changes this summer.

Slaven Bilic will want to change up the squad he inherited from Darren Moore, while the failure to secure an instant return to the Premier League means some players may choose to move on.

At the moment, though, it seems the focus is on adding to the squad, and according to Record, Bilic is particularly keen on one player.

The Portuguese newspaper report Bilic has ‘specifically asked’ for the signing of Filip Krovinovic from Benfica.

The midfielder has been made aware that he is not needed at the Portuguese club next season and is actively looking for a new club. Indeed, they report that there are several who are interested in his signature.

West Brom are the most keen, though, and have already seen an offer for the 23-year-old rejected outright. 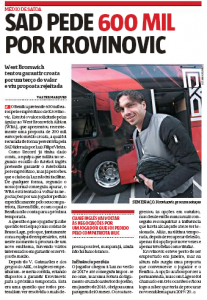 The Baggies were keen on a loan deal for Krovinovic and offered €200,000 to make it happen, but Benfica rejected that outright. In fact, they want €600,000 for any possible loan deal to happen.

That hasn’t put West Brom off, though, and they’re expected to return to negotiations.

They’ll have to significantly increase their efforts if the move is to happen, however.