Fanatik report Fenerbahce have given a deadline to Martin Skrtel after making their final offer to the Slovakian.

Skrtel, who’s been heavily linked with a move to Rangers, will become a free agent in the coming days and will soon decide his future. His former Liverpool teammate Steven Gerrard is reportedly keen to bring him to Ibrox on a free transfer.

According to Fanatik, Rangers are still interested in signing Skrtel, and Fener are set to hold talks with the player to see what happens next.

The Super Lig club still have some hope of retaining the 34 year old and they’ve offered him a yearly salary of €2m. Skrtel now has until the July 3rd to accept this proposal from the Yellow Canaries.

If the decision turns out to be a negative one for Fener, then the Turkish giants will enter the market for a central defender, with Huddersfield Town’s Zanka an option. 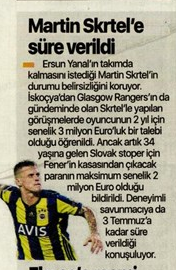 Rangers, meanwhile are seen as a favourite to land the defender, and it remains to be seen if these are just old claims dragged back out or genuine new interest.