With Unai Emery sacked and Freddie Ljungberg making do with the players at his disposal ahead of January, the future at Arsenal remains uncertain.

Their form since the Spaniard’s exit has been erratic, with just one win in three games against Norwich, Brighton and West Ham, meaning there’s uncertainty if the Swede will be in charge for much longer.

Arsenal need to find a new manager, and are exploring that avenue, but whether they do that before the January transfer window remains to be seen.

One man who could leave in that period regardless is Lucas Torreira, even if he has started and finished the last two games.

According to Il Mattino, the Uruguayan is a target for Napoli, and the road that leads to him ‘is more and more concrete’.

They remind their readers their local club tried to buy Torreira back in 2018 when he was set to leave Sampdoria, but were outbid by the Arsenal. 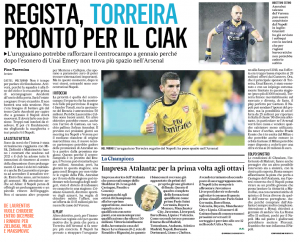 Il Mattino then go on to explain that with his ‘main sponsor’ (Emery) now gone, the midfielder is ‘inevitably’ on the market, and becomes, de facto, the perfect player for Gennaro Gattuso.

With Napoli in need of a regista, the club ‘can explore the possibility of a loan’, but the idea of ‘offering €25m to bring him back to Italy is enticing’, especially if Arsenal ‘want to cash in on a lesser used player’.

This seems to be more speculation than concrete information, but it seems the thought of making a move for the Uruguay international is certainly there.

We now have to wait and see if they act on it.