From the many transfer sagas we’ve covered since the start of Sport Witness, the most remembered by our readers is perhaps Nico Gaitán’s.

The Argentine midfielder was heavily linked to Manchester United over several windows, with the Portuguese press being quite sure he’d move from Benfica to Old Trafford at some point.

In April 2012, it was even reported in England that United had agreed a deal to sign the player for ‘£20m plus Fabio and Federico Macheda’.

The transfer never happened, and Gaitán was sold to Atletico Madrid in 2016, then to Dalian Yifang and finally Chicago Fire. Now he’s a free agent, and is looking for a club to play for.

That’s a good reason for him to give a six-page interview to Portuguese newspaper A Bola today, in which the 31 year old recalled his entire career and also talked about possibilities for the future. 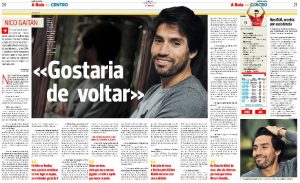 The failed transfer to Manchester United was brought up by the outlet during the interview, with the journalist recalling it was reported at the time, and asking why things didn’t work out.

“Yes. It didn’t happen because of citizenship, but now I have Portuguese nationality. It was harder because of that, it was always a dream of me to be able to play in England one day, but it hasn’t been realised so far,” Gaitán told A Bola.

That claim may be questionable, because had he moved for a big fee, a work permit wouldn’t have been a problem.

Asked if he’d like to return to Benfica now, he said: “Yes, of course I would, I was very happy at Benfica, I felt very comfortable at the club. But I also realise that in football it’s often not easy to make things happen. Many things must be taken into consideration. Whether the coach likes you or if you have a place in the team. I have the chance to return to Boca Juniors after ten years, there is Europe, I hope I can make the best decision.”