One of the big attractions of Premier League football, other than the amount of great players featuring on a weekly basis, is that some of the best managers are plying their trade there.

Pep Guardiola, Carlo Ancelotti, José Mourinho and Jürgen Klopp are just a few examples, and they were joined by another over the summer, as Marcelo Bielsa led Leeds United back to England’s top-tier for the first time in 16 years.

Following their promotion, the Yorkshire side have enjoyed a decent start to their campaign, picking up seven points from a possible 12, sitting eighth in the table after four games.

At the top are Everton, who have yet to lose or draw a game, led by the aforementioned Ancelotti, who will certainly be circling November 28th on his calendar, which is the day the Toffees welcome Leeds at Goodison Park.

This will be the first time to two sides meet since 2015, and will give fans the chance to see two great managers go head to head in what could end up being an important game in what is a tough league.

Ancelotti, in an interview with Gazzetta dello Sport, explained he sees Leeds as potential rivals: “In general, there is a levelling up: Aston Villa have spent a lot, Wolverhampton have ambitions, Leeds have the personality of their manager”. 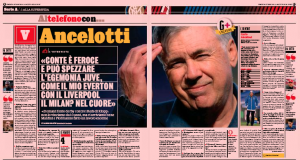 As well as that, it will be a chance for Ancelotti to finally come face to face with Bielsa.

He said: “We have never met. I’d like to have dinner with him and listen to him talk about football”.

That’s something we hear time and time again, and it just shows the respect the Argentine has in his world, with even a legendary manager like the Italian keen to hear what he has to say about the beautiful game.

Maybe after the whole Covid-19 pandemic, they’ll finally get a chance to do just that.