A few days ago, the conditions of Patrick Cutrone’s loan from Wolverhampton Wanderers to Fiorentina were finally revealed.

The Italian striker was sent back to his home country after a disappointing first six months at Molineux, and an 18-month deal with an obligation to buy should certain requirements be met agreed with the Serie A side.

Those conditions, however, were kept fairly secret until his agent Giovanni Branchini revealed Fiorentina would need to pay €18m to Wolves once he’d started 26 games.

This means games in which he comes off the bench don’t count, and he’s, so far, had been in the original XI 11 times.

Some quick maths tell us he now only needs 15 more starts to stay permanently in Florence, but getting them is proving tricky.

He’s only made three appearances so far, all off the bench, and there are now questions being asked about his role in Beppe Iachini’s squad by the local media. 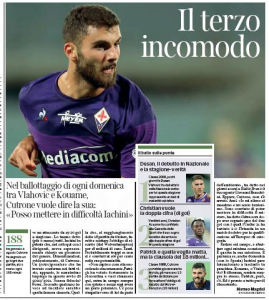 Corriere Fiorentino look at it on Friday, and say that his very little us could be down to ‘poor confidence’, but, and it’s a big one, ‘according to some, it would be that famous clause’.

The €18m that need to be paid is seen as ‘probably too much if you are not 100% convinced about his potential’, which is a fair view.

This certainly isn’t what Wolves will want, and there’s reason to be worried if Cutrone continues to start games on the bench.