Following Manchester City’s exit from the Champions League at the hands of AS Monaco, we wrote an article suggesting a few players Pep Guardiola should be looking at to bolster his defence at full-backs, an area exploited by the Ligue 1 side.

Among those names, to replace the ageing Gael Clichy and Aleksandr Kolarov, was the French club’s starting left-back Benjamin Mendy.

The 22-year-old had a great return leg against the Citizens and clearly impressed Pep Guardiola as France Football on Tuesday report the Spanish manager is keen to bring the French international to the Etihad in the summer. 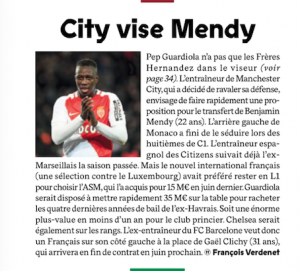 Already tracking his progress last season when he was still at Marseille, the former Barcelona manager is said to be ready to spend €35m on the young defender, which would allow Monaco to make a €20m profit in just 12 months.

With Clichy’s contract expiring in June, bringing in Mendy would certainly fill the gap left by the former Arsenal man.

However, considering Monaco are bound to receive offers for more than half their squad in the summer, it remains to be seen how many of them they actually allow to leave.

Our guess is two or three, and with Mendy towards the lower half of the financial spectrum compared to the likes of Fabinho and Bernardo Silva, they might try and hold onto him at least for an extra-season.