Everton goalkeeper Joel Robles believes Riyad Mahez will be the key player for Leicester City when they clash with Atletico Madrid tomorrow night.

Speaking to Marca ahead of Leicester City’s clash with Atletico Madrid, Joel said Jamie Vardy and Mahrez are the two players his former club need to keep an eye on.

“It’s good to see a player like Vardy, but I think the key to Leicester is Mahrez. Both make the difference, but the Frenchman is the one who has the most quality of the whole team and the one who decides games. Atletico will have to watch them, although the whole team is very intense,” said the current Everton No.1 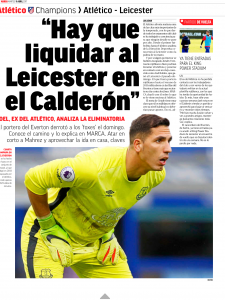 Joel also feels Leicester City and Atletico Madrid have similar styles, but believes the Spanish side will have too much quality for their opponents. He thinks their experience in the competition will also make them favourites to progress.

“There are as one… They are similar teams in regards to how they block and tackle every play, but Atletico has more quality and experience, which is very important at this stage of the Champions League. That Leicester has come here has much merit. In fact, I think this competition has given them strength to overcome all,” said Joel.

Leicester City side face a tough task making it to the semi-finals of the competition, and will need to draw inspiration from their Sevilla victory, and the end of last season.