Fulham are popping up all over the European rumour mill at the moment, and it would appear the Premier League club are looking for a left back.

Friday’s edition of Marca reports a loan approach for Real Madrid’s Theo Hernandez, which would see the English club pay €2m for a season and cover the player’s wages.

The 24 year old left back has repeatedly been linked with a move to the Premier League, but nothing has come off for him in the past. 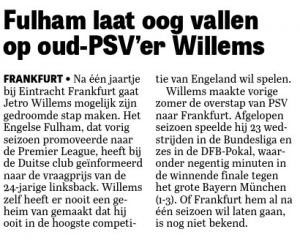 De Telegraaf say the switch would be a ‘dream’ move for Willems, given his desire to play at the top level of English football.

Now he’ll have to wait and see if Frankfurt are prepared to negotiate a sale, having only signed him from PSV a year ago.