The 20 year old moved from Atletico Madrid in the summer 2017 transfer window, and picked up 13 matches in La Liga plus a further four in the Copa del Rey.

For several weeks it’s been reported in Spain that a loan exit is on the cards as Madrid hope to allow the player to pick up more minutes elsewhere and hopefully develop further.

Theo played his best football whilst on loan at Alaves from Atletico Madrid and probably needs continuity to hit the heights again.

Marca report Fulham have made a loan offer for the player, but face competition from Real Sociedad. 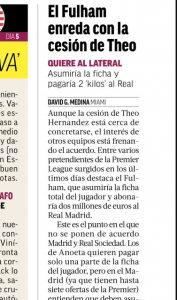 Fulham are prepared to pay a €2m loan fee to Madrid and cover all the player’s wages, according to Marca.

Whilst Real Sociedad are thought to have the advantage, the Basque club don’t want to pay all of Theo’s wages.

Marca claim, that as well as Fulham, Real Madrid have offers from up to six other Premier league teams.

This could all be a way to pressure Real Sociedad, especially as those other sides aren’t named.