Mundo Deportivo claim Puma will be the kit manufacturer for the Premier League winners, the La Liga outfit and the other clubs managed by City Football Group from 2019/20 season, barring the American side.

The Major League Soccer club have Adidas as their kit manufacturers because of the unified contract they have with all MLS clubs.

Nike and Umbro are the current kit manufacturer for Pep Guardiola’s side and Girona and that will continue until the end of the 2018/19 campaign. The contract with the American manufacturer is not at a high enough level from the economic point of view, explain Mundo Deportivo, which has seen them find a new kit partner. 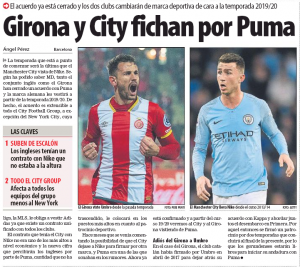 The Catalan newspaper claims the agreement between the German brand and City Football Group is ‘now closed’ and Manchester City and Girona will wear Puma from the 2019/20 season.

Mundo does not have the figures that the English club will receive from Puma, but they claim the new deal will place City ‘in the highest position’ in terms of sports sponsorship.