Towards the end of the English transfer window, we covered a story in L’Equipe claiming Cardiff City were ‘in contact’ with Le Havre’s Alimami Gory.

Unfortunately, the transfer didn’t go through, and the same newspaper have a big double page article as to why that was the case.

The tale appears to be a mix of miscommunications and confusion, with a sprinkle of Willie McKay thrown on top to make matters worse.

L’Equipe start off by explaining it all began in late July when Cardiff highlighted Gory as an attacking reinforcement after their return to the Championship.

Jean-Marc Goiran, the Welsh club’s president’s advisor, got in touch with Le Havre’s general director, Pierre Wantiez, to declare their interest in the forward, which is standard procedure.

He was then given Gory’s agent number by the Ligue 2 side in order to let them know about their desire to sign the his client.

Once that was done, the two clubs started talking on a fee, and Le Havre asked the representative to convince the forward this was a good opportunity for him.

Gory wasn’t thinking about leaving for his club, but once he heard Cardiff were interested, he saw the chance of playing in England and getting closer to the Premier League.

At this point, the Championship side offered €1.5m, which was some way off the €3.5m Le Havre were asking for. 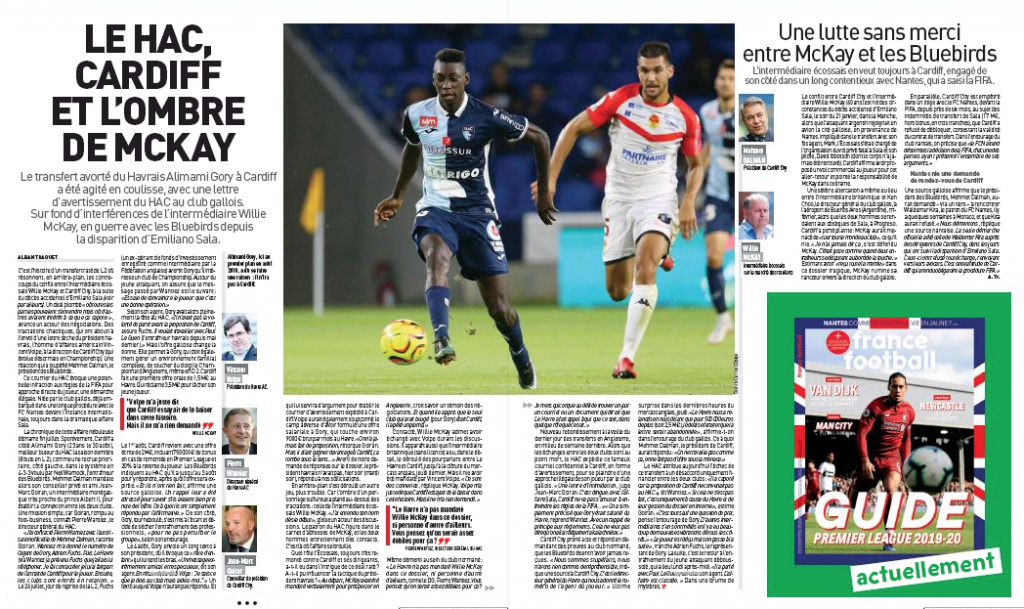 Fast forward to August 1st, and Cardiff City make a second offer of €2m + €750k in bonuses in case they returned to the Premier League and 20% of any future sale, telling the French club they had until August 3rd to reply, after which the offer would expire.

L’Equipe claim a Welsh source told them Le Havre then did absolutely nothing, and only replied after a follow-up from the Championship side, letting them know they were aware of the offer.

That’s when Gory decided to try and force a move quietly, sitting out from training so as to ‘not disturb the group’ and then sending a ‘friendly and respectful’ text to his club’s president, Vincent Volpe, explaining the move was a dream for him.

However, Volpe never replied, and this is when things started turning a bit sour.

L’Equipe explain the text was used by the Le Havre president as an ‘argument’ to send a warning to Cardiff, feeling there was some tapping up going on, which Goiran, the advisor to the Welsh club’s president, firmly denies.

This is when Willie McKay enters the scene, known to be in contact with Volpe, and believed to have been ‘verbally mandated to prospect in England’.

The (unlicensed) intermediary admitted to L’Equipe he did have a chat with the Le Havre president, but denies having been mandated, simply stating: “Volpe only told me Cardiff were trying to screw him over, but he never asked me anything”.

The Ligue 2 side also deny mandating McKay, or anyone else for that matter.

After receiving the aforementioned warning, Cardiff allegedly received a message from Le Havre telling them that for €2.5m, the deal could get done and the warning would be forgotten, to which Mehmet Dalman said: “We don’t work like that. We don’t make offers under threat”.

The French club deny this, and simply explain the reason why the transfer never materialised is because the Welsh side’s offer ‘didn’t suit them’.

However, the player’s entourage feel differently, stating ‘other intermediaries got involved and there was a lot of bad vibes on all side’.

Gory is said to be disappointed, but has since moved on, returning to training with his teammates and preparing the long season ahead after speaking with his manager, Paul Le Guen.