After failing to make the grade for Huddersfield in the Premier League, Laurent Depoitre didn’t stick around at the John Smith’s Stadium this summer.

Jan Siewert spent no time dismantling the squad he inherited, with eight departures from the club in total as they built for a difficult life back in the Championship.

Depoitre was one of those who departed, heading back to former club KAA Gent on a free transfer after managing just six goals in his 60 appearances for the Terriers.

A return to Belgium made sense for the striker, with his spells at Gent being the best of his career.

The 30-year-old scored 32 goals in 93 games for the club over two spells and said he was keen to find ‘pleasure on the field again’, although when asked explicitly about the ‘concrete’ interest from Middlesbrough, admitted he had options to stay in England.

“I had contacts with several clubs in England and Belgium, I could also go to Turkey and more exotic countries,” he told HLN.

“I immediately thought: ‘Why not back to Gent?’ I especially needed to find pleasure on the field again, and I have never had anything more than in my first period at Gent.” 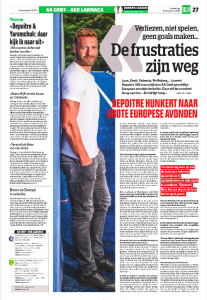 “I also like challenges; it doesn’t bother me to step out of my comfort zone for that. It’s good to be back. The frustrations of always losing, not playing and not scoring goals are gone.”

“It is not that I had a choice between all the top clubs in Belgium, but returning to Ghent was like coming home to me. Here everything started at the highest level for me.”

“Here, I found everything from that period. It is also a real challenge because the expectations are very high with the fans. That means that I have a lot to prove, the bar is high. But that is just a nice challenge.”

The 30-year-old came off the bench in his first two games for Gent this season against Eupen and AEK Larnaca, before scoring in his first start in a 2-1 loss to Royal Excel Mouscron.