Home Championship Former Middlesbrough forward extra decisive for new side, where was this form...
SHARE

Scoring 16 goals in 67 appearances for Middlesbrough during his two year stay, Cristhian Stuani enjoyed a relatively successful spell at Riverside, but relegation back down to the Championship last season meant a summer transfer was inevitable.

The forward eventually moved to new Manchester City affiliate Girona FC, freshly promoted from La Liga2, and with a World Cup spot with Uruguay on the line, he knew he needed to perform.

And perform, he has done, as so far, the 31-year-old has found the back of the net nine times in 14 league appearances.

Furthermore, his goals haven’t just been picked up in garbage time, they’ve been very decisive, as AS explain he’s earned his side nine points with his strikes, a feat only West Ham flop Simone Zaza exceeds by helping Valencia pick up 10. 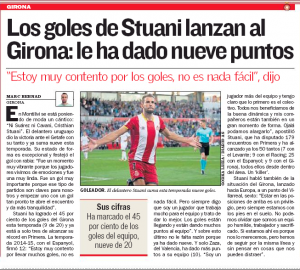 As for how the former Middlesbrough forward feels about his form, well, he isn’t unhappy, that’s for sure.

He said: “I’m delighted at scoring so many goals. It’s not easy, but I always say that I’m a player who works hard for the team and tries to do his best. The goals are coming and I’m helping the team win points”.

After all, what more can you ask from your star man?

However, Middlesbrough fans might be asking where this decisiveness was back when they were in the Premier League last season.