When we opened the Portuguese newspapers this morning, O Jogo was the first one. There was a story saying Arsenal scouted Porto last night, and we asked ourselves if the Gunners were watching Danilo again, due to the numerous links with him.

And it turns out that this possibility was confirmed by A Bola, who claimed that information right in their headline. They say Arsene Wenger sent a scout to the Estádio do Dragão only to watch Danilo, who’s been on a great form recently.

Porto beat Rio Ave 3-1, with a another superb performance, keeping themselves on top of the table. Despite missing a sitter, Danilo was praised by the local media for doing a great job as a box-to-box midfielder, and also showing skills dribbling past opponents. 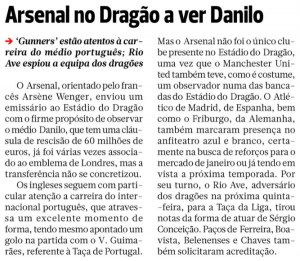 Arsenal have also been linked to Sporting’s William Carvalho recently, who plays in the same position as Danilo, so any of them could turn out to be an alternative for each other.

Difference is that Danilo has a €60m release clause, and should be more expensive than Carvalho. So Arsenal would have to be pretty much convinced that he’s a better option.

Considering the many years of links with both players, Arsene Wenger should know that by now.