Home Premier League Arsenal Star turns down other offer, wants move to Arsenal: ‘Once in a...
SHARE

Friday’s edition of A Bola brought William Carvalho to Arsenal back onto the agenda, again. Carvalho has been linked with a move to the Premier League for years and there’s been genuine interest, but at times it’s felt like the player’s representatives haven’t pushed hard enough.

The latest Arsenal claims also came with statements of interest from China, and a big money offer for both Sporting and the player. Whilst Sporting probably don’t care too much where Carvalho goes, as long as he does so for a big pile of money, the player thinks otherwise.

Saturday’s edition of the same newspaper says Carvalho has knocked back Chinese interest, and is especially keen on Arsenal. A Bola really talk the club up, saying the chance to join the ‘London giants’ is a ‘once in a lifetime’ opportunity and pointing out 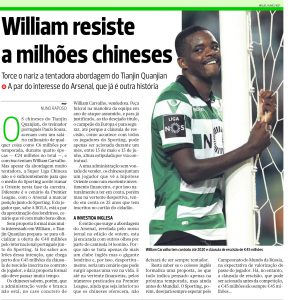 Arsenal are ‘not just another English club’… perhaps taking a dig at West Ham.

Sporting’s ideal scenario would be Carvalho signs a new contract, ups his €45m buyout clause and excels at the World Cup, allowing them to cash in every penny. Arsenal, meanwhile, are said to be considering a €40m move and securing Carvalho ahead of the World Cup.