Perhaps we were wrong and Malaga weren’t heading for inevitable heartbreak by thinking about a Sandro Ramirez return. Or, perhaps we were right and what’s happening now is just Malaga climbing up a sentimental hill which will send them crashing back down soon enough.

Marca go with the former option in their Saturday edition and make it sound like the Everton transfer, which would be a dream for Malaga, is very possible indeed. Sandro did so well at Malaga before moving to Goodison Park that he’s thought of very fondly at the Spanish club.

The Spanish newspaper say ‘what seemed impossible a few weeks ago now looks real’, and it’s even pointed out that talks, seemingly with the Everton player, have already been initiated. 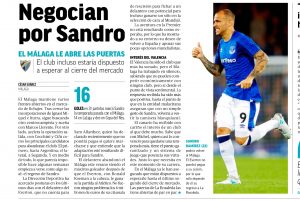 Whilst Valencia have been considered the favourites to sign Sandro from Everton, whether that be on loan or permanently, Marca state Malaga ‘has worked in silence, knowing that they cannot compete economically with any club, but from the sentimental point of view’.

Sandro just has to make a ‘simple gesture’, which would be giving up a huge chunk of his wages.