Home Europe “Except when they offend you” – West Ham player on social media...
SHARE

Javier Hernandez’s interview with Marca this week has been well covered, and the major takeaway is that he’s not afraid to talk up a West Ham exit.

When the Spanish newspaper put it to him that he may consider leaving next summer if he doesn’t get more minutes over the rest of the season, Hernandez was quick to say he could actually exit the club in January.

There was another part of Marca’s interview which was more about the man and his personality.

Asked if he’s tired of life as a footballer, the West Ham player at first asked why he’d been asked such a question, and when Marca explained it’s because of some of his statements over the years, Hernandez explained: “Most players think that football is beautiful, but then the people who run it take good… or bad decisions. That is already very subjective. I am a grandson and son of soccer players. I love this sport, it is in my veins. I have a lot of passion, but no, I’m not tired. That’s right, I’m honest and I always go face to face. If one day I get tired, I’ll say it. I move by passion, and if I’m not passionate about something, I will not do it. I do not do things just to do them.”

Further pushed on if he likes the environment around footballers, the 30 year old said: “If I get tired of that environment, I would not be here. Social networks, for example, I find them fun. People take everything to heart and in a personal way, like when I answer someone in networks. They believe that someone is spending all day thinking of that, and it is not like that. I see it as something fun, except when they offend you. It’s part of the show. I just want to show that I’m still a normal human being.”

Asked what he means by that, Hernandez explained: “People believe that, because you are a public figure, they should give me my attitude. If you leave the line, you’re bad and crazy. And I only sometimes get out of the character that the media has created for me. I want to live my life, not the one they tell me.” 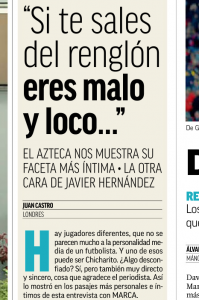 This is likely all tied in with criticism in Mexico over the years, with Hernandez a huge star in his home country and receiving all the coverage that comes with such a status, not always positive.

Marca wanted to know if being open in interviews brought trouble, and the West Ham player said: “Whether it hurts me or not, I do not care. Nobody is perfect. And football players put up as models of society and educators of children… when one only tries to make his life without more. Education is at home.”